My thoughts about Life Is Strange so far

I've been wanting to write about this for a while, but it's been put on hold for various reasons. One of those reasons is that I wanted to play the second episode of Life Is Strange before I made my mind up about it. The pilot didn't really amaze me. In fact, it annoyed me. However, the ending intrigued me enough to make me want to carry on.

There may be spoilers ahead (for episodes 1 and 2), but I personally find that a game of this sort is difficult to spoil, which will become apparent.

For those who don't know, Life Is Strange is an episodic choice-based game developed by Dontnod Entertainment, and published Square Enix. Its similar in a lot of ways to the choice-centred games created by Telltale, but still incredibly unique.

The game initially struck me as being Mean Girls mixed with Donnie Darko in game form, but I'll get into that later. You play as an 18 year old girl called Max, dealing with all the issues that being a teen girl brings. This is probably one of the reasons that I felt so unsure about the game. It felt too close to home. Some people might say this is a good thing, but I WAS Max, having to deal with bullies, friends, and boys. It was hard to watch, hard to DO. This is where the main mechanic of the game comes in handy, because Max can also turn back time. You can have a conversation, and if it doesn't go so well, you can have another go. Oh, how I would've LOVED to do that as a teenager...

Being able to turn back time is great, but it felt very forced. Every time Max spoke to someone, the voice in her head would say something like "Hmmm. That didn't go so well, I should try again" while the corner of the screen is flashing at you to press the button. I didn't like being told when I should change my mind. Yes, it was good being able to hear all the different outcomes of conversation trees, but I felt like I was being pushed in certain directions every time I was prompted to push the time button. I started to just ignore the voice in her head, and play it out my way. 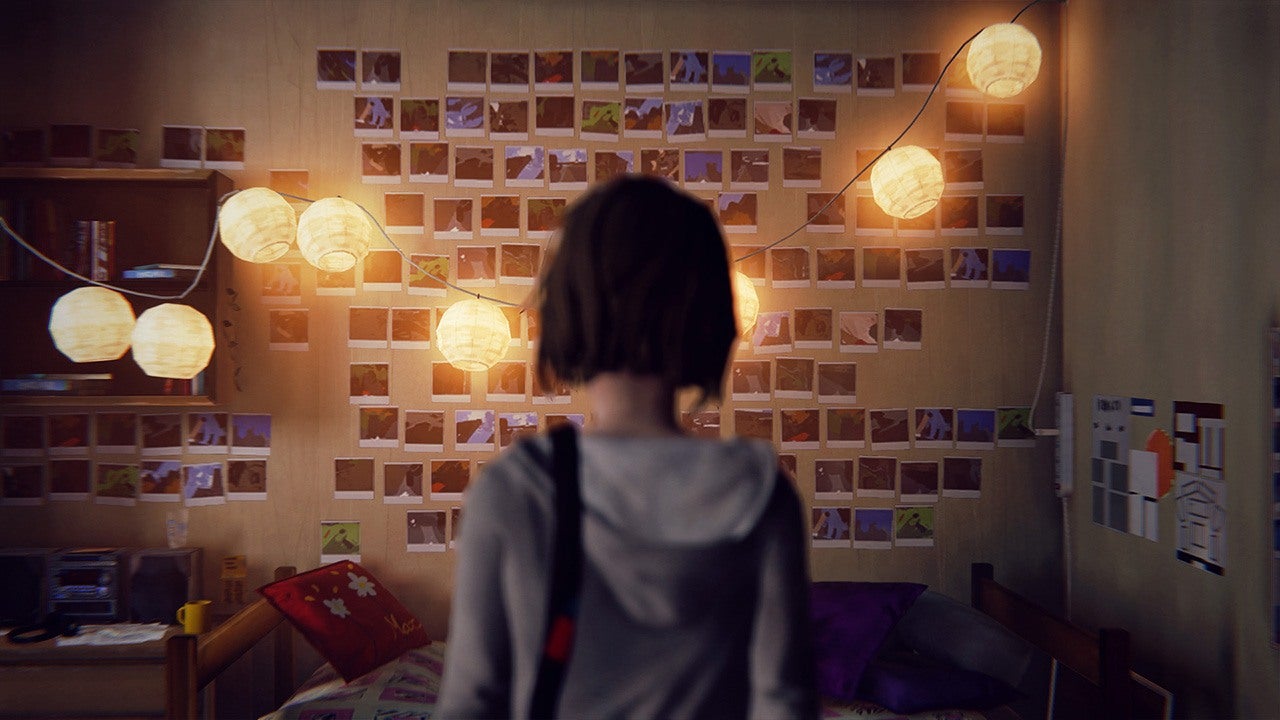 Max is also a photographer. (She's a teen girl, so of course she's a photographer.) However, despite the fact that the game is set in the modern day, Max prefers to use a little polaroid camera. Somehow it's allowed for her to be studying photography, and have a polaroid as her primary camera. Her teacher has no issues with it. Yeah, I'm not buying it. She even looks at her teacher's camera and says "Wow, I bet that takes pristine digital images, but I'm so analogue", or something to that effect. To top it all off, every time she takes a photo, she SHAKES THE POLAROID. Anyone who actually enjoys using instant cameras would know NOT to do that. Grr.

On top of the annoying details, the dialogue was pretty.... awful. Okay, that's probably a bit harsh, but it's very obvious that the writers have not interacted with teenage girls much, if at all (I think all the writers are grown-ass men). Nobody says 'hella' or 'bizarro'. I, for lack of a better word, cringed every time one of the girls spoke.

All of these things make it sound like I hated this game, but that's not true. There's a lot of stories going on at once in this game, much like in life, and they're all interesting in a different way. Max is reunited with a long lost friend, Chloe, who also happens to be friends with a girl who recently went missing in their town. Chloe's step-father is also the creepy security guard at Max's school. At the end of episode 1, Max has a vision of a huge tornado that's going to wipe out the town. It's a bit all over the place, but it left me curious, so I played episode 2

One of the main things that makes Life Is Strange different from a Telltale game is that there's a lot more exploring involved. The start of episode 2 has you, Max, walking around the girl's dormitories. You could head straight to the shower, like the game suggests, but you'd be missing out. You can speak to each of the characters, enter their rooms, and find out more about them. This becomes especially important later on, but I'll get to that. You speak to Kate, who I only vaguely remembered from the first episode as being the Christian girl who was picked on a lot. I made sure to talk to her, because I know that being bullied sucks, and she looked pretty upset. While talking to Kate, and other characters, you learn that a video of Kate has gone 'viral' (again, the writing annoyed me here. I wouldn't say a video getting spread around the school equates to 'going viral', but here we are). The video contains footage of Kate going 'wild', and long story short, Kate is pretty cut up about it. So as any good friend should do, you try to stop the information spreading.

Later on, you meet back up with Chloe, and there's a really fun section where you're proving to her that you have powers. It's just things like telling her what she has in her pockets, but I really enjoyed it. I feel like this is exactly what my friends would be like if I tried to tell them I could turn back time.

Chloe decides that the best way to play with your powers is to shoot stuff (because Chloe is so ~wacky~ like that), so you go to a junk yard for the most annoying section of the game. I felt like I was doing an RPG side quest to fetch an NPCs shit, except it was in the middle of the game and you can't skip it. Chloe is standing there in the junkyard like "could you go find me 5 glass bottles? Thanks" and I thought she'd maybe go find other stuff, but nope. You spend like 30 fucking minutes walking in circles looking for shit, while she's standing about drinking. Fucking Chloe, am I right? What the hell. Bitch, don't tell me to do your chores while you sit about doing FUCK ALL.

Ahem. Sorry, Got a bit carried away there.

Whatever, it was dumb, but things get better after that, and you learn that Max's powers aren't unlimited (because that would be over-powered as hell) and Max can do some serious harm to herself if she doesn't keep things under control...

I'm gonna skip straight to the action, this isn't a fucking walkthrough.

Long story short, you remember Kate? Yeah. She kills herself.

BUT DON'T WORRY, YOU CAN TURN BACK TIME?

Oh wait. That whole "it's not unlimited" thing. Hmm.

So Max sees Kate fling herself off the top of a building. Not good. Turn back time! Okay, she's up top again. Then Max learns that she can temporarily freeze time, and she manages to get to the roof top for the most intense/heart-wrenching part of the series so far.

You have to talk Kate down. This is where all the extra exploring you (hopefully) did comes in handy. You're Kate's friend. You should know her.

But I couldn't do it. She died.

I couldn't let that happen. I reloaded my save.

Now, BEFORE you get shitty at me for reloading my save, let me explain. First of all, I just wanted to know that I COULD save her. Again, this is where LIS differs from many Telltale games. In several Telltale titles, it doesn't matter what choices you make, some things are just going to happen. I kind of wanted to prove to myself that I COULD save Kate. I knew it HAD to be possible. They couldn't just let her DIE. If you really paid attention to everything in Kate's room, then you can save her, and I'm so glad I did. Kate didn't need to die, and now you can get on with figuring what the HELL is going on in this crazy town.

So yeah, episode 2 was awesome, even with the stupid bottle thing. It had some of the most intense moments I've ever experienced in a game, and I felt really immersed in the story. Not to mention, the soundtrack is pretty great. Episode 2 made me forgive the cringey writing, and the damn shaken polaroids. It felt great to play a story-based game where I could feel that my choices really mattered, and I can't wait to play episode 3.

If you haven't played Life is Strange, I would highly recommend it. I played on Xbox One, but it's available on Xbox 360, PS3, PS4, and PC as well.
Posted by Sophia at 03:43 No comments: